On September 18th, Nozomi Entertainment launched a Kickstarter to produce a dub and provide a HD release for the cult classic anime series Emma – A Victorian Romance, which was initially broadcast in 2005.

The Kickstarter quickly gained attention from fans of the series and also those who backed their previous Kickstarter Dub project for Aria The Animation (which was very successful, leading to all three seasons being dubbed thanks to stretch goals) and has already reached its $110,000 goal with 14 days to go as of this article being published. This has led to a new selection of stretch goals, the best of which is the second season also being dubbed if funding reaches $180,000. 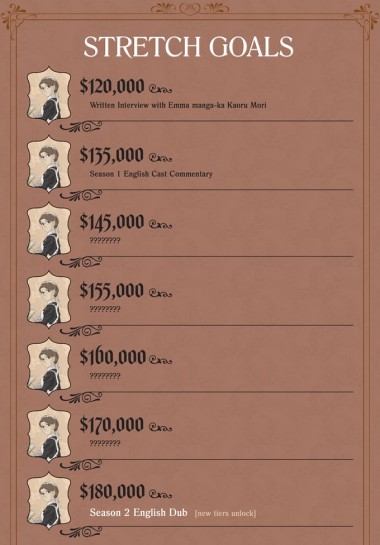 The dub itself has seen concerns regarding the authenticity of a US produced Dub being able to create authentic accents for the Victorian England setting (especially as dubs for anime set in England have tended to sound “mockney” and rarely pulled off the dialect). That being said a recent update regarding the staffing for the dub has seen Nozomi Entertainment hire Rhiannon Ross, alongside prior confirmations of casting an assortment of British and American Voice Actors to ensure a dub of good quality (cast yet to be confirmed at this time) suggest that the series is in capable hands, and that fans and backers should look forward to the finished product!

For those interested in contributing but would like to get an idea of what the historical anime is like, Nozomi have provided a link to the full first episode (subbed) here.

For further updates, be sure to regularly look at the Kickstarter pages’ Updates tab.