Are you excited or disappointed?

The famed ‘rock’ festival based in Reading and Leeds, has announced the headliners for next years August event.

The list includes the Foo Fighters, The 1975, Twenty One Pilots and Post Malone. It was announced on the official Reading/Leeds Twitter account, as well as the artist’s individual accounts. The announcement was hinted at last week, with fans eagerly waiting to see what this year has in store.

The event itself will take place between August 23rd-25th, at Richfield Avenue (Reading) and Bramham Park (Leeds).

Your first #RandL19 names are HERE including your headliners…@foofighters, @twentyonepilots, @the1975 and @PostMalone! 🔥🔥 Tickets on sale this Friday 9AM! 💥 Full names HERE 👉 https://t.co/7dXwQwlevW pic.twitter.com/E9dk85XmN7

The full list of acts can be seen below, with artists such as Bastille and Juice WRLD involved. 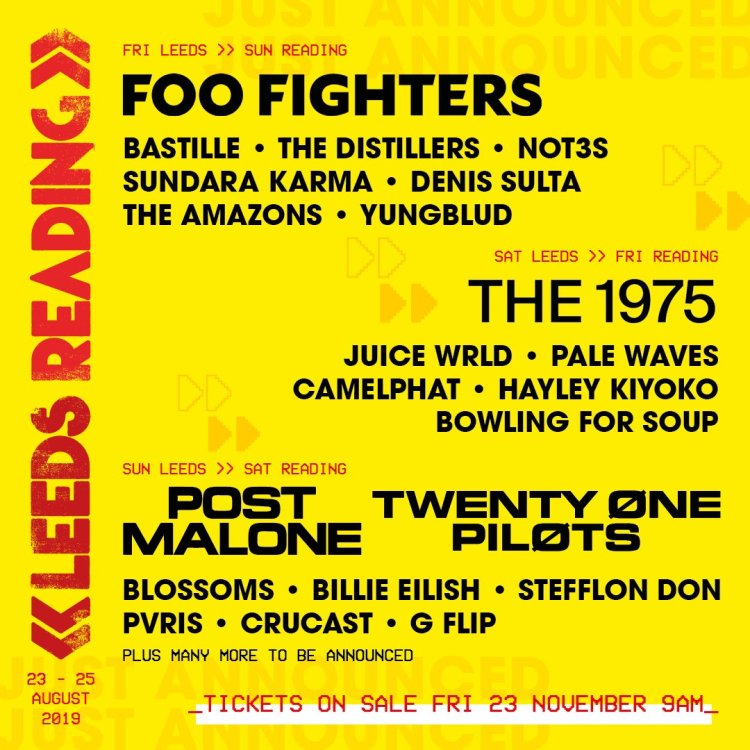 Last years event featured Fall Out Boy, Panic! at the Disco, Kendrick Lamar, Kings of Leon and Post Malone. The entire event was divisive among fans, who believed that the event had lost its ‘rock’ identity. Some fans may be disappointed with next year’s event due to the lack of rock bands in the list, but more will be announced very soon.

Tickets go on sale this Friday, November 23rd at 9am.