Part two focuses on the technical aspects of this classic collection…

Four sets in and the BBC restoration team continue to bring a consistently solid transfer for classic Doctor Who. The video and audio material here is the oldest we’ve seen so far in the range but still provides subtle but welcome improvements over the DVDs (of which three stories had already been given improvements through special editions.) The transfer feels more similar to that of Season 12 than the newer 18/19 but this is to be expected due to the age of the stories. Continuing a trend this collection also features a new optional 5:1 mix for Planet of the Daleks which also sports some updated special effects and a new colour restoration which improves upon the efforts made for the 2009 DVD release.

The Season 10 boxset is around the same size as Season 12 and (likely) the upcoming Season 23 release. By now the grey book design with its unfolding layout, concealed booklet and Blu Rays have grown on this reviewer, though it is prone to being fragile during transit it seems as none of them has arrived in perfect condition. The Blu Rays were relatively easy to remove thanks to the placement of the disk trays on my copy and the Lee Binding artwork is, once again, lovely outside and inside the box-though, the Season 18 art remains a firm favourite of mine. Pete McTighe’s booklet, meanwhile, is an invaluable companion to the collection boxset once more, giving readers new insight into what is considered a milestone season for the series.

Doctor Who is a series that has been treated very well in regard to VAM (value added material) over the years, especially thanks to some forward thinking which has allowed contributions to commentaries and documentaries from those who sadly passed away before the material saw the light of day. The commentaries for Season 10 are truly wonderful thanks to contributions from the late Barry Letts, the always on form Katy Manning and charming Terrance Dicks, who features alongside Nicholas Courtney for The Three Doctors and Tim Preece and Prentis Hancock on Planet of the Daleks.

A complete list of special features is available below: 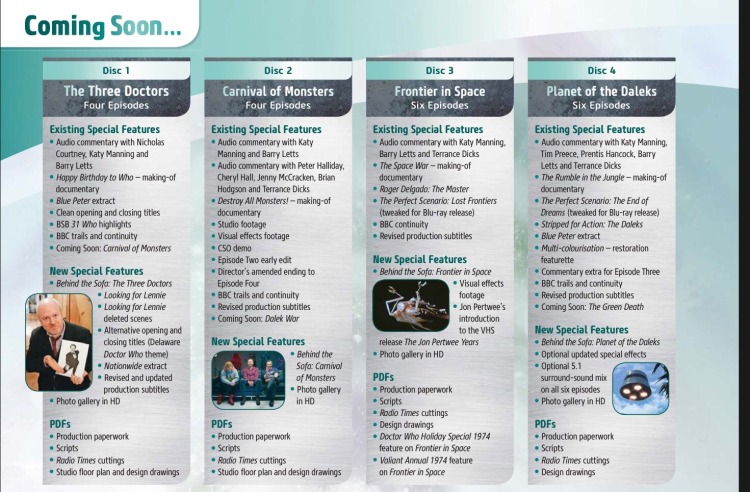 Each story for Season 10 has a making-of documentary and a menagerie of features from previous DVD releases and accompanying this is a welcome number of new additions including a retrospective for the Pertwee era in The Third Man which collects archival interviews and new contributions from Katy Manning, Mark Gatiss and Steven Moffat as presented by Matthew Sweet. Toby Hadoke, meanwhile, gives us Who fans a celebration of the life of a little-known Doctor Who director in Looking for Lennie and we get another set of Behind the Sofa segments which are fun thanks to some enthusiasm from the likes of Katy Manning, Pete McTighe and John Levene. Keeping up with the Joneses is also a nice feature as Katy Manning and Stewart Bevan visit locations seen in The Green Death. The bonus disc is also home to a 90-minute omnibus edition of The Green Death and another archival inclusion from The Panopticon Archive as well as two episodes from The Sarah Jane Adventures which feature the return of Jo Grant alongside Matt Smith’s Eleventh Doctor.

As far as future releases go Season 23 is due for a September release whilst Seasons 26 and 14 are currently rumoured for a December and (likely) February release. Any confirmations will be reported if and when they’re announced!

Season 10 is an important milestone for Doctor Who and this boxset does it justice thanks to some solid improvements over video and audio and a wealth of VAM allowing Who fans to possess another slice of the definitive collection for Who. As of this review, the set appears to be sold out on Amazon so reluctant buyers should be advised about low stock levels.

5/5 Another must buy for Who fans!

Look back at Part 1 of the review for more detail on the stories included.