Today, Japanese readers of Weekly Young Jump saw the official* release of Tokyo Ghoul: re’s last chapter, which saw the story of Ken Kaneki and his friends and allies around him come to a conclusion.

The chapter was 36 pages long and documented the progress in key characters’ lives in the six years that followed the climactic battle that saw the CCG and Ghouls unite to take down the mutual threat of Furuta, V and the mutated spawn of the various “Dragons” located around Tokyo.

The CCG is no more and has instead been replaced by the TSC, of which Shuu Tsukiyama is head of alongside long-time comrade Kazuichi Banjou and former CCG employees such as Itsuki Marude and Matsuri Washuu (now Suzuki-signifying the end of the family bloodline.)

Other TSC employees include Koori Ui and co, some of which have moved on to other occupations (Take Hirako for instance disappeared into seclusion as a civillian) or continue to serve towards keeping peace in Tokyo. The surviving Quinx members meanwhile continue to oversee new squadees alongside the now mature Yusa Arima.

Ayato and Hinami are also assumed to now be a couple, the former having survived an onslaught of mutated spawn in chapter 168. He was the one who saved Ken Kaneki from certain death following the final battle with Nimura Furuta and the now Dragon-bound Rize, bringing the key events of his life full circle.

Kaneki and Touka Kirishima, his wife now own a coffee shop together and have a daughter and another child on the way-with frequent visits from friends and family (a particularly great panel involves great Uncle Yomo and his niece bowing his hair.) Hide and Ken also get a nice conversation addressing the latter’s guilt about what has transpired and how they’ll move forward.

The final panels see the Kaneki family enjoying a bright sunny day, harkening back to the quote that adorned one of the first panels of TG: re with its announcement “The sky next to tragedy is…A clear Blue.”

It’s a sweet ending with hopeful implications, with some character fates finally being resolved such as the retrieval of Ginshi Shirazu’s body and his sister Haru recovering from her ROS. Heck even seemingly dead characters such as the long-comatose Yukinori Shinohara and Iwao Kuroiwa who was last seen with a sword through his neck and dying on the ground came back into the fray.

Others however were seemingly left without definite conclusions (just what happened with Eto after her unexpected resurrection in Chapter 175?) or were given limited appearances, such as Amon and Akira who don’t even get a paragraph. Overall however I was fairly satisfied, and am sad to see it all end.

It is unknown whether the Tokyo Ghoul franchise will receive a part 3 or not, but based on this conclusion it is unlikely to prominently feature the current cast of characters.

The final manga Volume is scheduled for release in Japan on July 19th 2018 and will contain chapters 165-179. It will be the largest volume to date with 322 pages meaning around 288 pages will be chapter material leaving 32 extra for bonus content such as omakes and character bios.

*Fans may note that we got unofficial translations of the chapter on Monday, these saw a lot of response and activity on forums such as Reddit and 4chan.

Tokyo Ghoul: re also saw an anime adaptation, the thoughts on the first six episodes can be found here, and will be getting a second season in October. 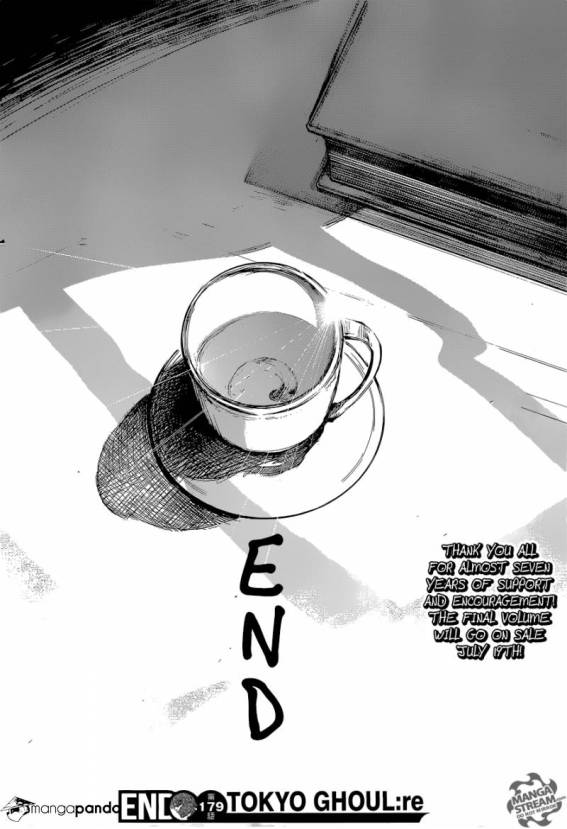